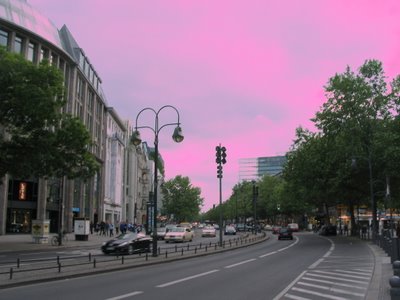 Looking west on Ku-dam Strasse, standing in front of Gedachniss Kirche. After the war, this street in what became West Berlin became the main shopping street in Berlin. I walked up and down it and saw many cafes, department stores, and even museums. 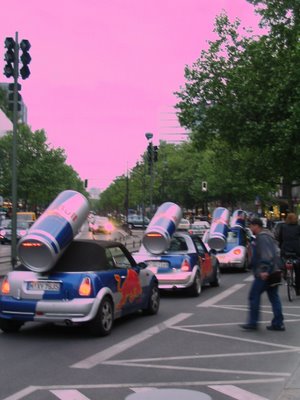 This was a caravan of volkswagons with giant Red Bull cans on top. After I snapped the picture, he walked up to the nearest vehicle and received a free can. They were passing them out to whomever would ask.

I recall feeling elated for the guy. Why is it we get so excited over getting a free $2 drink?
Posted by SteveA at 9:12 PM No comments: 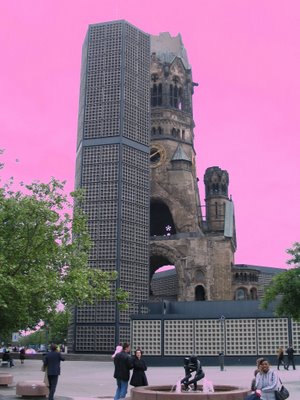 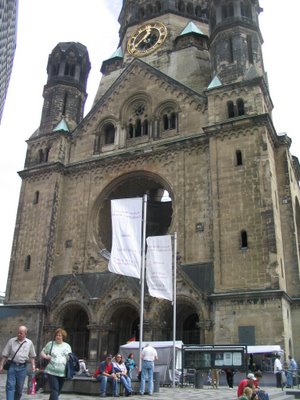 I left Knoxville at 11:45 am Sunday May 21, flew all night, sleeping about 3 hours on the plane. Took a taxi, costing 40 eu (over $50), from Tegel airport in Berlin to the Dorint Hotel in Potsdam. After registering for my symposium, rather than going to bed, I asked a hotel clerk for directions to Kurfurstendamm Strasse. It is also known as Ku'dam.

The easier thing to do would have been to take a taxi there. But, I felt I needed a labor, or task, if you will. So, she wrote some notes for me with info on which bus and train to take to my destination. I felt discomfitted, nervous, and uncertain. I was afraid of making a fool of myself, afraid I'd mess up and get lost or something. I watched as the bus having the proper number came and passed me by. I was at the wrong stop on the opposite side of the road. Then, I crossed the street and waited another 20 minutes for the next one. I tried to pay the bus driver since I thought that was my instruction. He motioned for me to sit down. I then tried to put paper money into the automatic ticket dispenser. But it wouldn't work. Things were not going well. Thankfully a young man asked if he could help. I explained where I was hoping to go and he kindly assured me he'd show me what to do. When we arrived at the main train station of Potsdam, he showed me how to read the train schedule and showed me where to stand for the next train. Looking around, we didnt' see a ticket machine. He told me to climb on board anyway and to ask to buy a ticket if I was questioned. When he left, I went upstairs to the Reisezentrum (trip center) and bought an all day ticket. I preferred to have a ticket in hand rather than cause a possible problem. Later, while waiting for the train, an oriental man was asking people for help. I took him upstairs and showed him where he could buy a ticket. I climbed on board my train and two stops later was at my destination.

My first stop upon exiting the train station was the Kaiser Wilhelm Gedachtniss Kirche. This church, built in the late 19th century, was bombed and severely damage during WWII. It has been partially restored. Shrapnel wounds to the structure are apparent. The tower to one side in the left hand photo is a chapel where one can take a few moments to meditate, as I did. Musical programs are also presented there. I don't know why the background turned out pink. I must've accidentally set a weird setting on my camera.
Posted by SteveA at 12:49 PM No comments:

For my dedicated readers, all two of you if there are that many, I will be out of town till next week end.
Posted by SteveA at 3:59 AM No comments:

The Beauty of Truth

Len L. Hjalmarson whose blog is Next Reformation always has thoughtful things to say and says it so well. This is from his post on The Beauty of Truth.

Ultimately I think this relates to the incarnation itself, where Word and Spirit embrace. Word.. the logia, the rational dimension.. and Spirit.. the power, the energy, the life. When these two embrace, we have something qualitatively different than when they stand alone.

Isn’t it interesting that much of our Scripture is written in poetry, and nearly all the prophets are also poets?

Here's a great post from Richard Beck about having religious doubts and how acknowledging them can be a good thing. It is part 9 from a series of posts on the psychology of belief. They are really good.
Posted by SteveA at 5:51 AM 2 comments:

Out of the Question ...Into the Mystery

Here are a few quotes from Leonard Sweet's book Out of the Question ...Into the Mystery. This book has had an immense effect on me.

"The way to save the world is not through more rules to live by, but through right relationships to live for." p 1

"We have much to learn about the truth of God that is revealed only through relationships." p 9

"Ultimate reality can be experienced only in relationships...Christianity is much more than a wisdom tradition or a moral system or a path leading to higher states of existence." p16

"Few were so careless of orthodox formulas as Jesus, and there is something more than a little precious in affecting a greater concern for orthodoxy than his" p 17 (he quotes this from C. K. Barrett from The Signs of an Apostle, the Cato Lecture p88)

It appears that our church will be undergoing a split. I am 55 years old and have never seen such a thing first hand before. It appears to me that it is a matter of good people having honest but irreconcilable differences of opinion. I've always thought that many congregations in our fellowship separated over rather minor things and that breaking up and forming separate groups was always wrong. In this case, though, I think it may be best for all involved. Time will tell.
Posted by SteveA at 4:04 PM 2 comments:

Then the singing enveloped me. It was furry and resonant, coming from everyone's heart. There was no sense of performance or judgement, only that the music was breath and food.

Its a pleasure to say in this instance "been there done that", one of life's great joys.

Traveling Mercies, Anchor Books 2000 edition page 48.
Posted by SteveA at 7:13 AM No comments:

I travel to Cleveland Monday for the 52nd International Instrumentation Symposium. Will give a tutorial on phosphor thermometry and other sensor applications, along with two of my colleagues. Its a great town. I've been to the Rock'n'Roll Hall of Fame already and NASA Glenn as well. This trip we'll get to visit a local brewery when the conference breaks for tours on Wednesday afternoon. Will be back Friday evening. Next trip: Berlin.
Posted by SteveA at 2:03 PM No comments:

Something else from A. N. Whitehead from the book Science and the Modern World (chapter II):

Each generation criticises the unconscious assumptions made by its parents. It may assent to them, but it brings them out in the open.

My generation of moderns will probably continue to duke it out over a liberal/conservative divide. It's my hope the younger crowd will move beyond this and get to the real business of saving the world.

And check this out too, its a list of ANW quotations.
Posted by SteveA at 5:25 AM No comments: