The End of Apologetics Chapter 4 - The Politics of Witness

"We are not going to be able to reason ourselves back to paradise."


That is one of the closing sentences from Penner's book The End of Apologetics.  The book as a whole is a critique of using an over reliance on expert reasoning as the primary means of combating skepticism and atheism in defense Christianity.

"... I cannot use the objective truths of Christianity to tear down others and think that I am thereby communicating the truth of the gospel."


He looks to the prophets for example of effective, fitting and appropriate witness:


"What is also true of prophets, then, is that while they challenge and even speak against their traditions, they are also more deeply committed to them than those who are comfortable in the status quo.  It is precisely because they are so committed to their tradition and believe in its deepest impulses that prophets sometimes attack it.  The prophetic call is always to a deeper fidelity to the founding event of the tradition, but not in such a way that controls it or even tries to make it into a univocal, monochromatic tradition."


And he looks to Paul whose approach is an example for us of what prophetic witness should be.

"Paul engages believers and unbelivers, Jews and Greeks, men and women, slaves and free, all patiently and carefully in terms of their concrete, particular identities within the context of their actual situations.  He lives with those to whom he preaches.  He eats with them.  He works and worships with them.  Consequently, his theological categories do not blind him to the particularities of those to whom he witnesses - to the point where Paul does not even think of others in terms of a "universal human condition,"  Paul's preaching calls the people of the nations not to be conformed to the theological categories he inherited from Jewish orthodoxy (e.g., "circumcision"), but to faithful confession of Jesus as Lord within their cultural forms, whatever they may be.  It is as if for Paul, as missiologist Andrew Walls observes, Christianity "has no fixed cultural element" and is therefore "infinitely transferable."  For not only can the Christian gospel be translated into new cultural and linguistic thought forms, but given the missionary imperative explicit in Paul's letters (and the entire biblical narrative", there is a sense in which the truth of the gospel requires this kind of translation:  'It is as though Christ himself actually grows through the work of mission.'"


And this, after Penner has initiated the chapter by conveying that the social dimension of Christian witness and states that "edification is taken to be the primary act of witness."

In closing out my comments about this interesting and, for me, difficult book, I direct your attention below to a page from The Book of Knowledge Encyclopedia 1952 edition.  I grew up with this set and it helped to form me.  This page shows the development of the pen from Roman times to the middle of the last century.  You see that it has changed drastically as the medium upon which it writes has changed.  This is a metaphor for Christian witness and even for Christian belief, in my opinion.  Change will happen and we do not help ourselves if we become obsessed with using exclusively the tools that have outlived their usefulness. 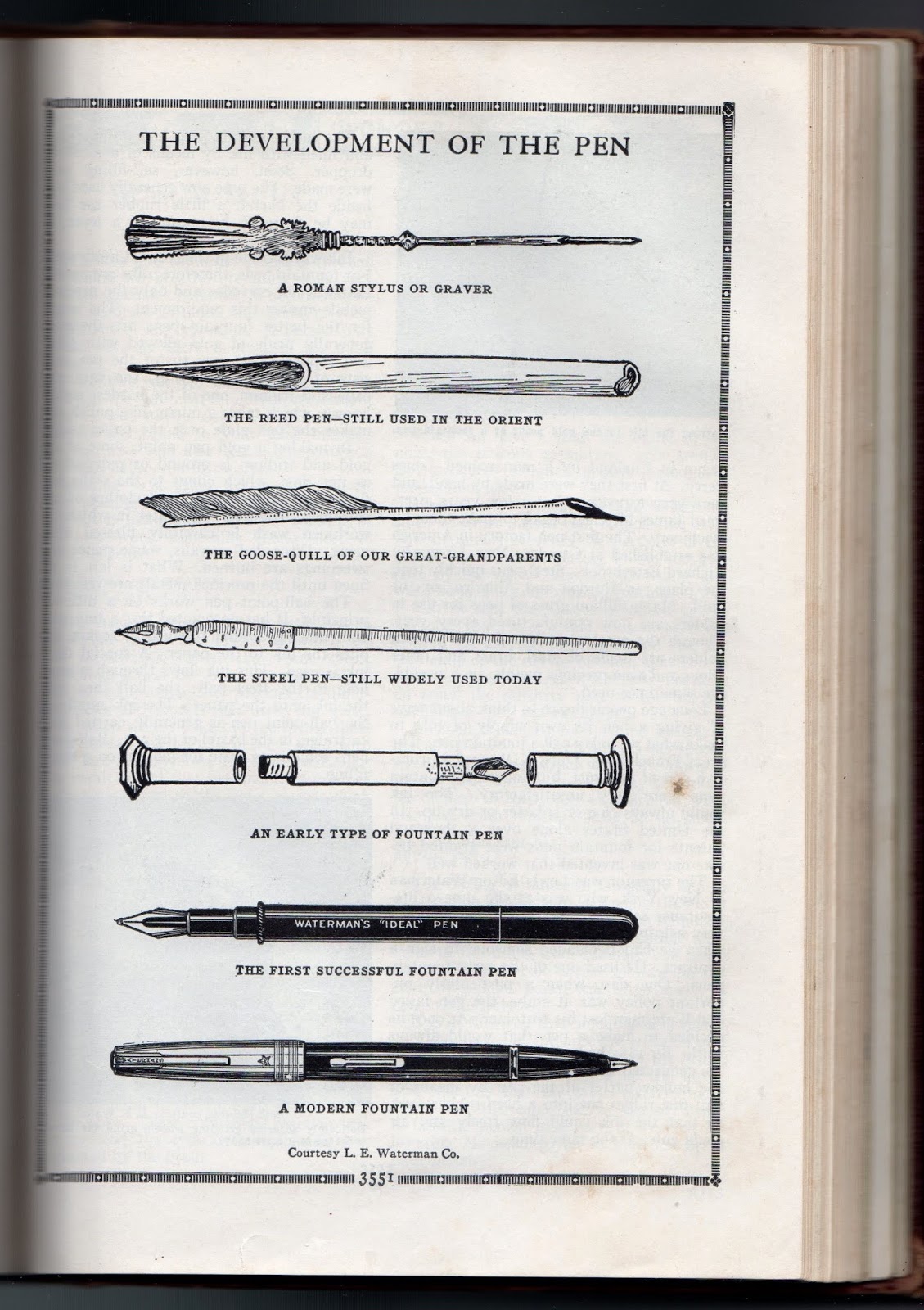 Posted by SteveA at 12:55 PM No comments: Links to this post

Truth Is That Which Edifies


From Chapter 4 "Witness and Truth" of The End of Apologetics, Penner says:

The modern concern with truth marks a sharp departure from the premodern focus on natural substances that make the world what it is and, in turn, make it possible for our words or thoughts about them to be true.  It is because things are already true to themselves that premoderns believe we can perceive, think, or talk about them truly.  Prior to modernity, just as with reason and rationality, it is the cosmos and its being - the it is - that make our thoughts and our words about it possible.  It is because things have forms or essences that are identical to themselves, as it were, that our minds and our words can ever have any thruth in them.  This is not the case, however, for moderns who reject the old-world cosmology.  Modern thinkers tend to believe that our thoughts and statements can be true when the things we speak and think about are self-evidently the same as our words and thoughts.


We are at the beginning of a new era where we are moving beyond this modern way of doing truth.  It seems to work well when trying to do science and technology.  This is the domain of simple inanimate things or simple biological creatures.  When it involves creatures with consciousness then things get sticky.  How we know or think we know truth matters.  Penner suggests we move from a "correspondence" theory of truth, the modern conception, to consider that truth is that which edifies.

When we speak about edification and witness, we are never talking about a purely private relation to anything......There is something of an intrapersonal and public element to truth, and because we are social beings, the edification of an individual person necessarily takes place within a community of other persons wo share (very nearly) the same commitments, values, and vocabularies.


Posted by SteveA at 6:39 AM No comments: Links to this post