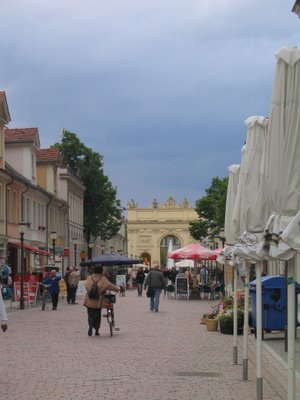 To the right is Branderburger Strasse in Potsdam, Germany This was a short walk from the Dorint Hotel (where I stayed) down Voltaireweg and then Schopenhauer Strasse. These streets therefore are named after philosophers. Later I made it down Hegelallee. Took these on the evening of May 23.

Below is the Sanssouci Palace. Found a great web site that has a satellite view from above and I can see all these places I walked. 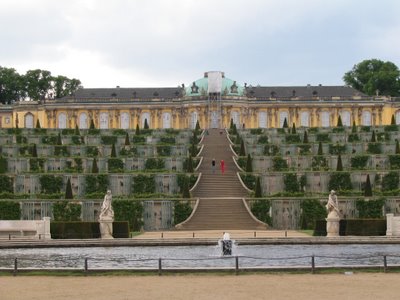 Over at Generous Orthodoxy there is a discussion about universalism. It is not from the perspective of the traditional Universalist/Unitarian standpoint, rather from and with a philosopher with evangelical roots.
Posted by SteveA at 4:06 AM No comments: 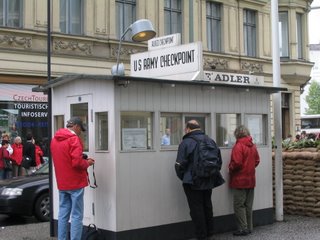 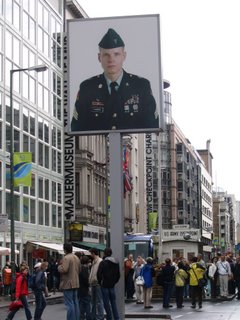 This is Checkpoint Charlie. From about 1961 to the end of 1989, the only legitimate way to pass back and forth between East and West Berlin was through this portal. The US GI picture lets a person know which way to freedom. There is an iron curtin soldier on the opposite side. It is a wonderful thing that the Berlin Wall and Checkpoint Charlie are no longer barriers to the free flow of thought and human beings.
Posted by SteveA at 5:48 PM No comments: 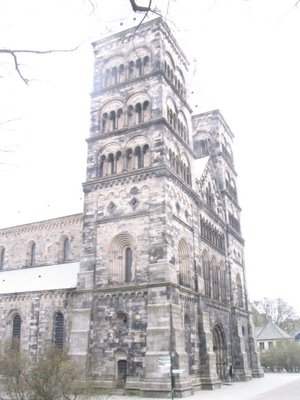 In April of 2005, Dorothy and I travelled to Lund, Sweden where I lectured and served as a "Faculty Opponent" for a Doctoral Candidate (and he was successful). Here's a picture of the Lund Cathedral. Dorothy is barely visible at the entrance. If I remember what was said about it, this structure was lucky to escape the destruction of churches associated with the reformation in Sweden.

The more cathedrals you see, the more you want to see and experience. In 1999 I took some Russian colleagues around Germany and Holland and the was one of the main things they wanted to see.
Posted by SteveA at 7:26 AM No comments:

Well, we saw the Da Vinci Code last night. Because of reviews I was prepared for it to be less good than it was. I'd rate it 4 stars.

Of couse the story line is baloney. But I thoroughly enjoyed it. About 15 years ago, I read Holy Blood, Holy Grail; the book from which Brown got many of his ideas. Those guys evidently really believed what they wrote. If not, I don't know how they could sleep at night. There are so many holes in their arguments, it is amazing anyone could be taken in by it. They pile on subjunctive phrase after subjunctive phrase. If such and such happened then we might assume whatnot and therefore it could be possible that blah blah blah. Given this then perhaps ....

Let us suppose that Mary Magdalene really did bear Jesus' child and that the line continued. Why keep it a secret for so long? I can see maybe for a generation or two. Hegissipus talks about two of Jesus' kinsman who were known during the reign of Domitian. (As everyone knows, Jesus had a brother named Judas. They were his grandsons. Domitian questioned these two grandnephews of Jesus but decided they were no threat to him. See Peter Kirby's fine website on Early Christian Writings for more information about these relatives of the Lord.)

What secret would we like to make up and send to our descendants in 4000 AD? Its hard to get excited about anything like that. Give me a reason I should dedicate my life to such.

I read a book about 20 years ago called the Mountain of Names. The author claims that any person of English descent has a 95% chance of being descended from Alfred the Great. I believe he was a 9th century king. More recently, in a newspaper article, it was stated that virtually all Europeans can claim they are descended from Mohammad. He married off one of his daughters to some fella in Spain. A mathematical statistical model predicts our relationship. I don't have a problem with that. Though Jesus didn't have any children, his brothers likely had several. If they and a sufficient number of their descendants got out of Jerusalem in time before its decimation in about AD 70, then it is likely their line continued and that nearly all Caucasians and many Asians and Africans are descended from them. If that isn't the case then we can move it back a generation or two to Jesus uncles and aunts. For sure, virtually all of us descend from David, King of Israel.
Posted by SteveA at 9:06 AM 2 comments: 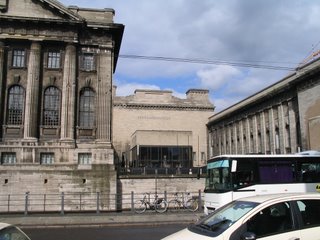 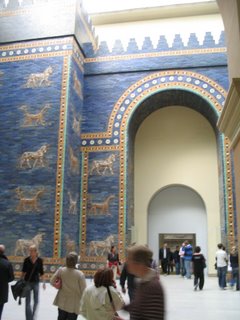 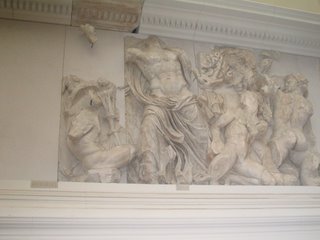 Visited the Pergamon Museum for 1 1/2 hours before closing time. Could have spent all day. They have a fantastic collection of things from the ancient world. It is a wonderful thing to see the actual items in person that I've seen in history and religious books all of my life. Yes, those things are real. 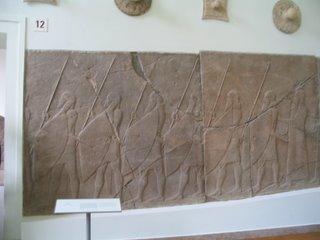 Assyrian Basrelief
Posted by SteveA at 5:51 AM No comments: 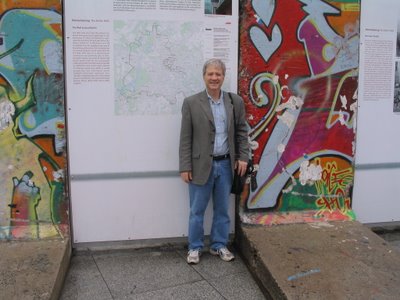 One of the biggest and happiest surprizes of my life was the tearing down of the Berlin Wall around Christmas time 1989. It was a wonderful thing to have my picture taken beside these painted remnants of the wall.
Posted by SteveA at 6:36 AM No comments: