Reality Isn't What It Used To Be 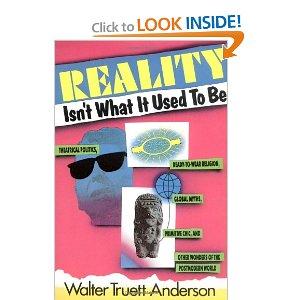 Reality Isn't What It Used To Be by Walter Truet Anderson has been on my list for many years.  One reason I had not read it sooner was because it dates way back to 1992.  So I thought it might be out of date.  Well, it pretty much was not out of date but described well the last twenty years, in my opinion.  The main theme is that we humans socially construct reality, have always done so, but in the postmodern era we are now in, we recognize that fact (or it seems to me we should).
One habit that I have acquired with using my Kindle is to highlight various passages that jump out at me.  It commonly takes two or three weeks for me to read some of the Kindle books.  So I do not remember what all I've underscored.  Then, when I get the chance, I upload to my computer and read them all.  There were quite a few such passages in this book.  Here is my favourite.
But religions are living entities, and they live in human minds. And they change as the times change and as human consciousness changes. There is little similarity between the worldview of the fourth-century Nicene Fathers and that of the twentieth-century conservatives who try to keep their faith intact by using the Nicene Creed—no more than there is between the California Indians of a thousand years ago and the people who play the Carlos Castaneda game in the Big Sur mountains. Some kinds of religious change are visible and easily documented, others relatively invisible. We know that Christianity has gone through tumultuous events in recent centuries—the Reformation, the increased power of secular constructors of social reality, the institutionalization of freedom to choose other religions or none at all—and such changes inevitably bring modifications in the actual beliefs of those who still keep the faith. The ancient faith that is advancing into the postmodern world is not quite the faith of our fathers.
I believe there is value in renewal and restoration.  In fact my religious heritage identifies itself as part of the Restoration Movement.  But, Christianity and religion should grow, adapt, and change.  It always has and it always will.
Posted by SteveA at 7:32 PM No comments: