Evolution is like a Muscadine Vine & Jab at Dennett's Skyhook Metaphor

Been reading back through A Third Window: Natural Life Beyond Darwin and Newton by Robert Ulanowicz. It is a difficult book. I recognize a kernel of value in many of the things he says but I'm not knowledgeable of things in depth enough to connect the dots in many of his arguments. But here I present a useful idea.

One of today's most strident reductionists is Daniel Dennett who says that evolution is a series of machine cranes stacked up on one another and that no skyhook (God) is involved. Here's what Robert says

Overall, however, I eschew his metaphor as misleading. Like Elsasser and Bateson, I believe that many, if not most , mechanical analogies are procrustean, minimalist distortions of the dynamics of living systems. Paraphrasing the analogy of Oliver Penrose (2005), living dynamics only look rosy (mechanical) because most insist on looking at them through rosy (Newtonian) glasses.

Robert describes an observation from his muscadine grapevines that grow in his garden. The vines grow up from the ground to two levels of horizontal support wires and spread sideways. Eventually, at some point, they send down roots at other locations. Next, the original trunk dies.

It struck me like lightning that here was a more appropriate metaphor for the dynamics of evolution! The muscadine plant represents an evolving system across several hierarchical levels. No skyhooks are involved because the system always remains in contact with a foundation of bottom-up causalities that remain necessary to the narrative. ... later, higher structures create new connections that eventually replace and/or displace their earlier counterparts. Such displacement is a key element in solving the enigma of how emergent structures and dynamics can influence matters at lower levels that had played a role in their own appearance.

To read more you can google-book it over to circa page 100 for further details.

The above provides me with an analogy/metaphor that can begin to explain how human thoughts can control physical body actions. We are provided with a way out of bottom up causality. And, Laplace's conjecture can be tossed aside. This is one aspect of an emergent explanation for our existence. Emergence, for me, is a useful concept for reconciling science and religion.
Posted by SteveA at 6:12 AM 2 comments: Links to this post 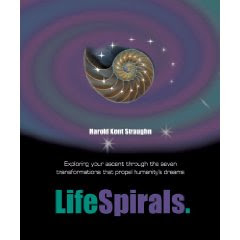 I've been a member of the Stone-Campbell listserve for about 10 years and Harold K. Straughn is likewise a member. His early life involved time at Abilene Christian University and the Herald of Truth. Following many life adventures he is now a Disciples of Christ minister. His book LifeSpirals arrived yesterday. I think I'm gonna like it. Here's what's at Amazon:

Product Description
LifeSpirals assimilates revolutionary discoveries in brain research, learning techniques, and the new field of "wisdom psychology." More than just a self help book, LifeSpirals guides readers through the seven major stages of adult learning that mark the achievements of history's greatest leaders. All the reader needs to maximize his/her own achievement is a greater awareness of how to make use of what he/she knows, which lies buried among your early memories. LifeSpirals shows the reader how to access these lost memories and reconstitute them into a new vision for his/her life that can make the boldest dreams so far seem like tame compromises.
Posted by SteveA at 7:19 AM No comments: Links to this post