An in depth and meaningful tour.  The NATO meeting in Rzeszow ended on Thursday the 23rd.  Early the next day I took the bus to Krakow.  Was just there for a fraction of a day and already very tired. I hit the market and made a circuit then headed to St Mary's church where a friend said walking tours began. Jakub was standing by himself holding his sign. When asked, he said he was doing the Jewish tour in English at 11 am. It was 10:30 and initially I thought I'd rather do the Old City tour first. But I thought of a question for him concerning the significance of the dragon. His answer showed me not only that he knew the facts, but that he knew how to present and articulate more than superficial details. Our conversation continued and it was clear to me that he was a person of depth and insight. I was hooked. The tour, it was 2 1/2 hours, did not disappoint. His knowledge was wide ranging and he conveyed it with humor, where appropriate, and poignancy. I highly recommend and would do it again. Jakub is not Jewish but clearly has much affection for his subject.

Several weeks later I was in Huntsville, AL and visited with one of my colleagues who was also in Poland and stayed a week later than I.  After hearing me tell the above, she said she and her husband had the same tour a week later and with the same guide.  She said that Jakub has a PhD is Sociology and his dissertation topic concerned the story of the Jewish people in Poland. 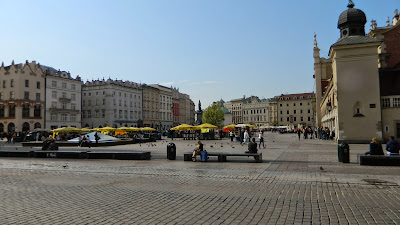 Fortunately, Krakow escaped significant destruction during WWII. Thus the central part of town with its ancient buildings and churches survived. This is a photo of one side of the Grand Market. Read more about it here: http://www.krakow-info.com/rynek.htm — in Kraków, Poland. 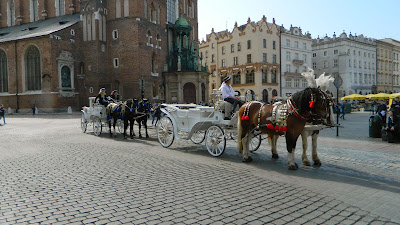 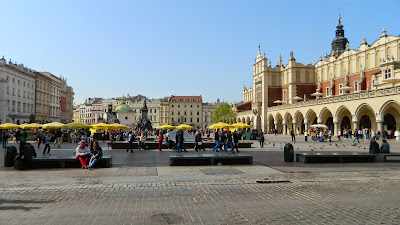 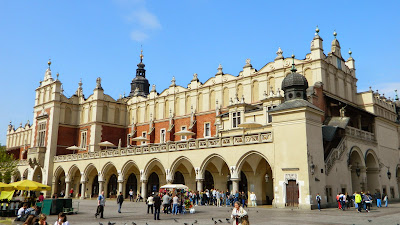 "Krakow's Cloth Hall, the Renaissance monument of commerce. The world's arguably oldest shopping mall has been in business in the middle of Krakow's central Grand Square (Rynek Glowny) for 700 years. Circa 1300 a roof was put over two rows of stalls to form the first Sukiennice building – Cloth Hall – where the textile trade used to go on. It was extended into an imposing Gothic structure 108 meter long and eight meter wide in the second half of the 14th century. " Lifted the above paragraph from this url: http://www.krakow-info.com/1clothall.htm 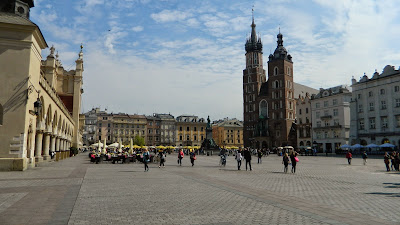 St. Mary's Cathedral, the brown building and tallest in this scene. Just to the right of it is where I saw a guy holding a sign for Free Walking Tours of Kracow. I asked him which tour he was leading. He said the Jewish Tour and we would start out at the square and then head to the Jewish quarter, then the Ghetto - from where most were taken to the camps, and ending up at the site of Schindler's factory. Initially I was not sure if I wanted to do that one. But after some discussion it was clear he was a man of depth and insight and I was hooked. http://freewalkingtour.com/jewish-krakow-free-walking-tour,city,1.html 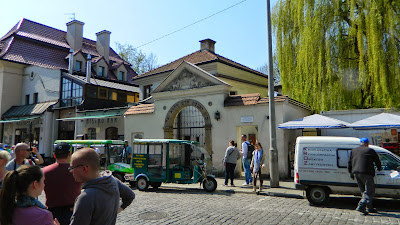 If I remember correctly, this was the synagogue of Moses Isserles, also known as Rema. He was a renown interpreter and his writings unified and ending up being a guide to nearly all Sephardic and Ashkenazic Jewish people. He lived from 1520 to 1572. You may recall the prohibition against working on the Sabbath. But what about starting a fire on the Sabbath? It does not get that cold in Jerusalem. Snows once a century. But not being able to light a fire in Poland in winter could lead to mortal danger. He helped resolve such questions. A better explanation than I can give is here: http://en.wikipedia.org/wiki/Moses_Isserles 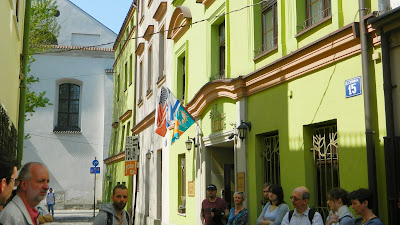 This narrow street is in the movie Schindler's List. He claimed the reality did not involve such a pleasant place. 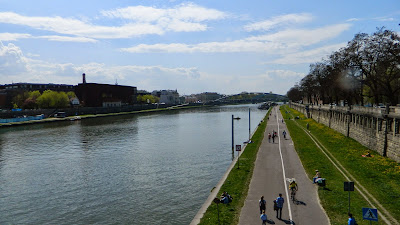 We pass over the Vistula River bridge on our way to the Jewish Ghetto. And here we are. In the background are some of the actual buildings into which Jewish families were crammed. They found that they did not have room for their larger furniture items like couches and desks. They kept the chairs. When the war was over and the Jews were gone, there remained an amazing number of chairs. This plaza is a memorial to these people, 90% of whom were killed

Finally, a Journey to Poland

This nine year old in 1959 knew little geography. My world was Central Oklahoma, Southeast Michigan and Northeast Arkansas.    I think it was Christmas of that year that my Mom gave me a book The Silver Sword. It was here that I learned of a country called Poland. Oh to be young again when every little datum was an instance for wonder. I was fascinated even by the name Poland and people called Polish.  The story concerns a Polish family from Warsaw that was separated early in the  WWII conflict when the father and mother were taken  away. That left three children to survive on their own, ages 12, 9, and 5. They do survive and all are reunited after the war. So, from that age, I had an interest in and a special place in my heart for the Polish. Any time someone in books or media of Polish heritage, whether Jewish or not, was mentioned, in the back of my mind, it called back the memory of the book.

Finally, after all these years, my work sent me to Poland. I was there Sunday May 18 to Saturday May 25. Landed in Krakow, from there a nice two hour bus ride brought me to Rzeszow Poland.

I was there to attend a NATO Symposium and present two papers.  Stayed at the Bristol Hotel at the central market square of the town (of about 175,000 people).  The hotel was spacious and nice.  The food was good and quite inexpensive.  On Wednesday afternoon I had time to explore the town square and take pictures.


I'm half way around the world and yet the center of the town has a statue to an American Revolutionary War patriot and friend of Thomas Jefferson.  He is a Polish hero as well. 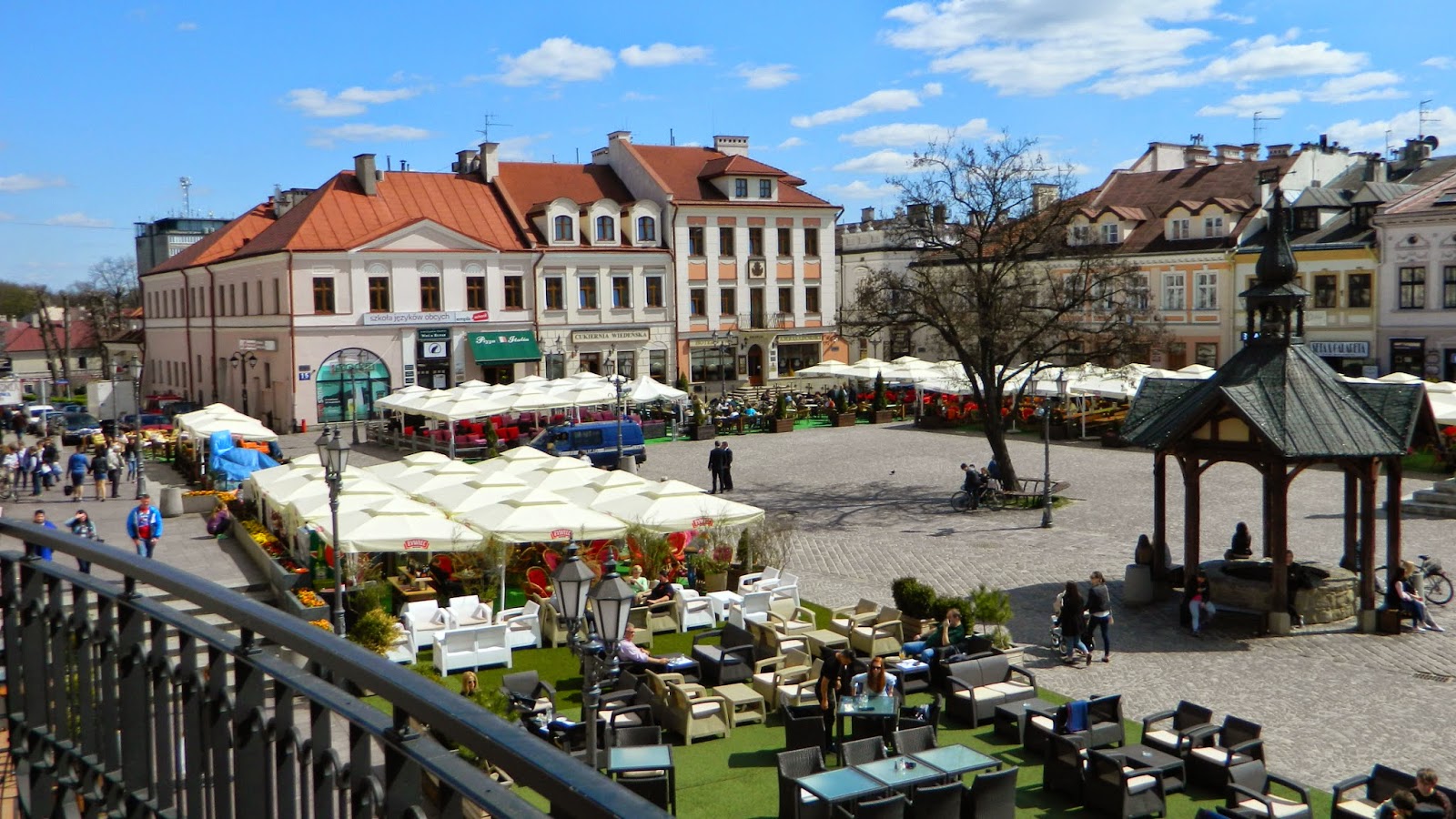 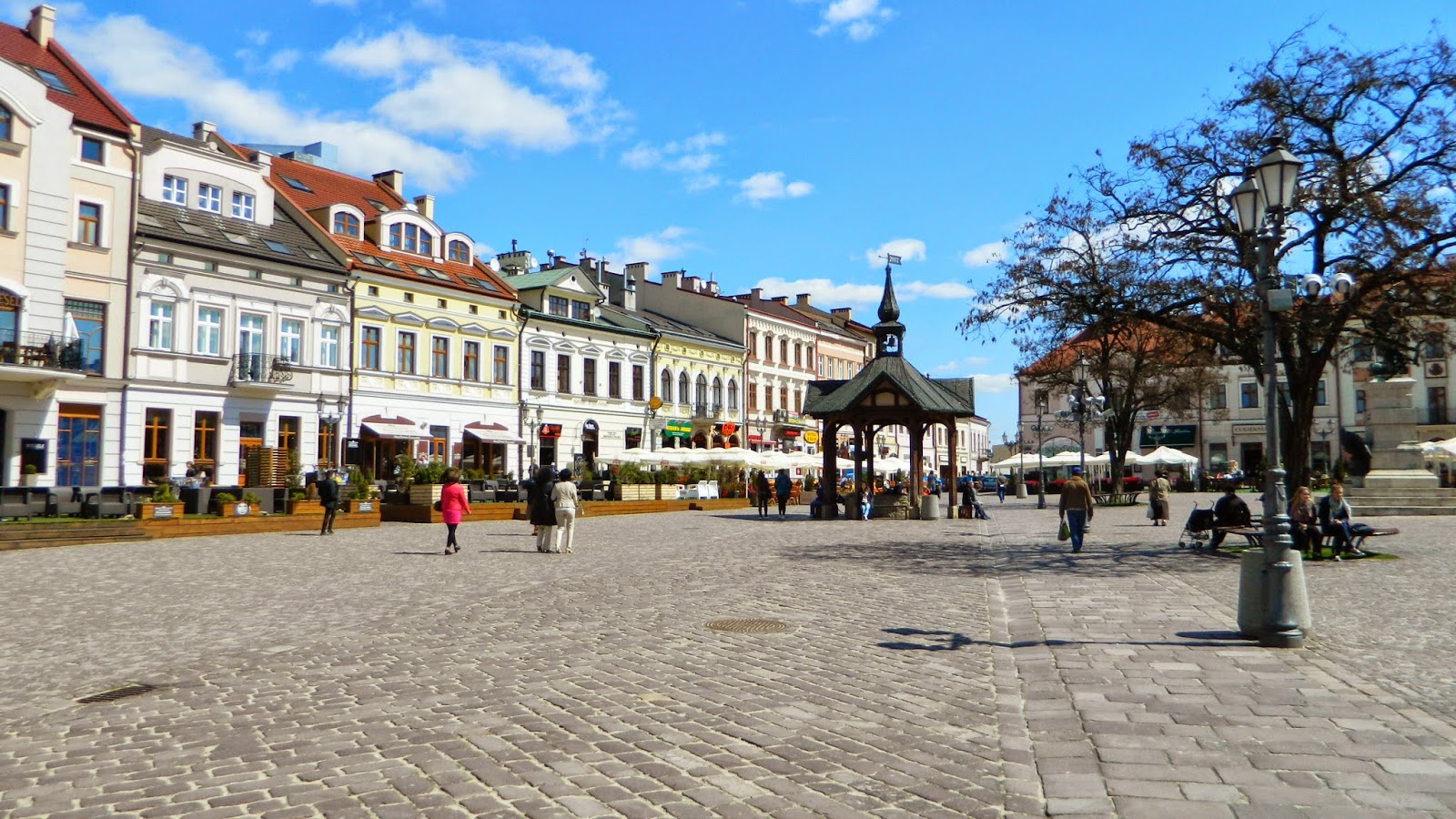 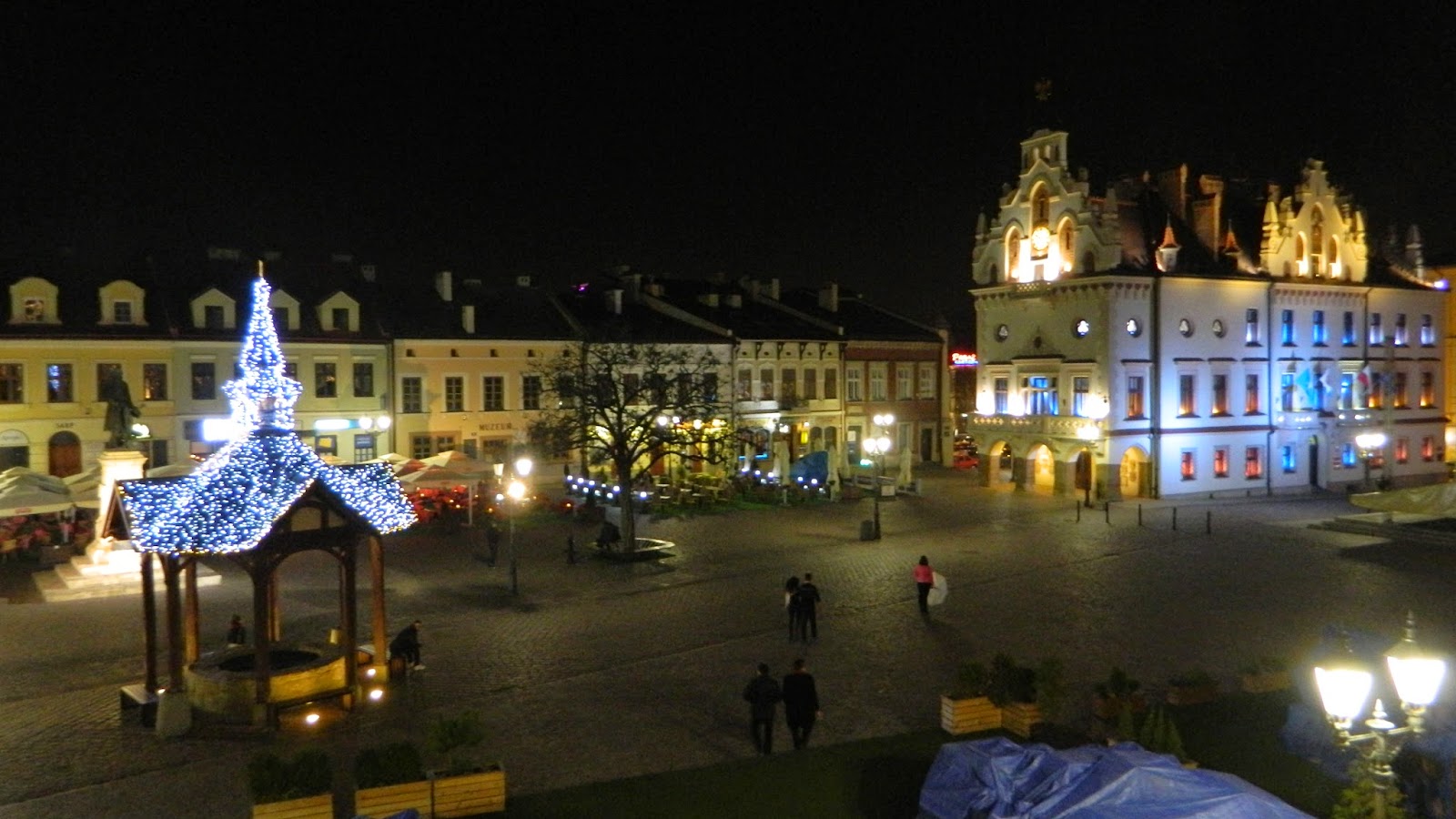