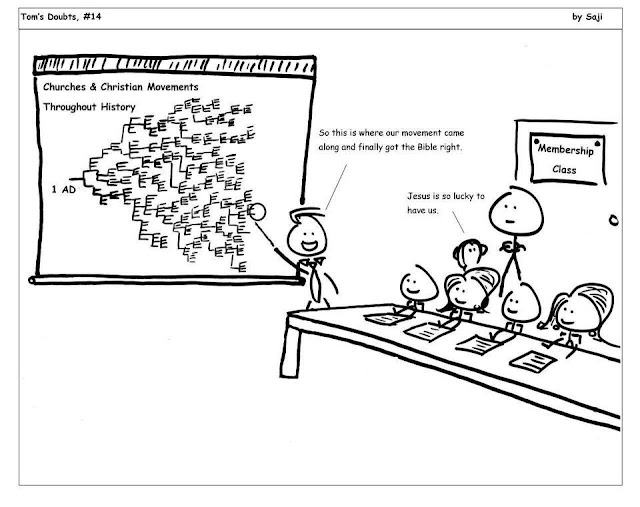 From the Theology and Culture blog.

I'm not saying that there is not value in each of these branches and that all of them are wrong.  In fact I think generally speaking that all of them have value and presented good in their time and place.  They are experiments that teach us.  Christianity is a work in progress.
Posted by SteveA at 9:25 PM No comments:

At the Science + Religion Today website I came a across a quote from Jonathan Franzen that relates to art, science, and religion.  Here is a portion of what he said:


“So I spend quite a bit of time trying to make sense of how I seem to have a soul, I have this ghostly consciousness, yet I know as a believer in science that this is just coming from carbon, hydrogen, and oxygen molecules. I think if you take science seriously there are a lot of interesting questions to ask. I would be happy if more novelists, not just science fiction writers, paid attention to that.”


I share with Jonathan an interest in the mystery of “this ghostly consciousness” and how this arises given the material constituents from what we are constructed and which seem reducible to inexorable scientific laws. And yet I'm very religious.  At long last, I’ve come to the conclusion that the emergent character of reality holds clues to this mystery.

Aids to me in understanding this:

1. The Marriage of Sense and Soul by Ken Wilber.
2.  A New Kind of Christian by Brian McLaren
3.  The Emergence of Everything: How the World Became Complex by Harold Morowitz.
4.  Philip Clayton & Paul Davies (eds.) The Re-Emergence of Emergence: The Emergentist Hypothesis from Science to Religion

In addition, various explorations into our postmodern age have been a help as well.

Posted by SteveA at 6:48 AM No comments:

Today I'm linking to a wonderful post by Len Hjalmarson over at NextReformation titled dis-orientation and renewal.  Here are some highlights:

Disorientation connotes liminality and chaos. Both of these conditions root a creative and adaptive response. In The Sky is Falling as in The Shaping of Things to Come, the authors argue that disorientation is a necessary condition to renewal. We generally have far too much invested in the status quo to freely embrace change. A shaking and breaking is necessary. We enter into most transitions only half-heartedly if at all, and most of us are dragged to that place against our will.
...

Disorientation and dislocation create marginality. Marginality generates openness to risk and innovation, openness to “the other.”
...

Finally, the gift of disorientation is the possibility of communitas. In these strange times when the foundations of modernity are crumbling, and Christendom itself is breaking apart; in these times when those things we took as secure and predictable no longer seem so sure, we can react in one of two ways. We can turn more inward, and find ways to buoy up a false sense of security in our sameness. We can look for ways to save our lives and preserve our comforts and privilege.

Or we can remember that in the Incarnation God became vulnerable and weak. He gave up status, privilege and security and entered our world and embraced us in our sin. He even took our wrongs on himself.

Posted by SteveA at 7:31 AM No comments:

From the Network of Spiritual Progressives.  This is cool and beautiful: 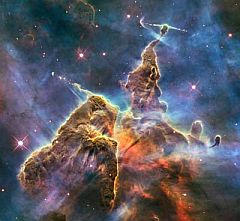 Everything that has ever happened in the history of the universe is the prelude to each of our lives. Everything that has happened from the beginning of time has become the platform from which we launch our lives.
We are the heirs of the long evolution of Spirit. Each of us is the latest unfolding of the event of Creation. Our bodies are composed of the material that was shaped in the Big Bang. And so, too, our spirits. The loving goodness of the universe breathes us and breathes through us, giving us life and consciousness, and the capacity to recognize and love others.

- Rabbi Michael Lerner
Posted by SteveA at 11:54 PM No comments:

From this Site
Posted by SteveA at 9:46 PM No comments: