My sister's son, Rob Shaver, visited Al Sturgeon of Ocean Springs, MS last week. I had visited Al's blog some time ago but had no idea that he was Rob's former basketball coach. The blog is Minutes to Memories and the May 23rd entry describes their visit which I reproduce here, minus the picture.

Then, best of all, my old friend Rob Shaver arrived from Arkansas to hang out with us for a while! Rob was my star point guard back in 1994 when we won our conference and had a spectacular season. He was an unbelievably quick, long-range bomber who scored points like John Dobbs collects blogs! In addition, he was a deep-thinking young man with whom I shared a lot of great conversations. A lot has changed since 1994. I hadn't seen Rob in ten years, and in that time he nearly died with Stage 4 cancer. In that battle, he had his left shoulder blade removed, and in awful irony, he can't lift his left arm high enough to even shoot a basketball anymore. But more importantly, it is inspiring to hear Rob talk about how cancer changed his life for the better - his new lease on life has translated into an even deeper place from which he approaches life.
Posted by SteveA at 7:12 AM No comments: 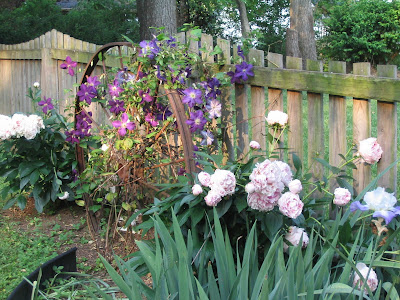 In our backyard by the fence. Dorothy's flowers. This is VISUAL MUSIC. I am more of an auditory music person than a visual music person. But even I can appreciate this.
Posted by SteveA at 7:13 AM 2 comments: