More on the Nature of God from Dorothee Soelle

My days are quite busy with my new business, the Holiday Season, and the pandemonium related to getting our house repaired from the recent insult to it.  And then there was the Sandy Hook school incident.  Haven't had time for sustained thought and meditation.  Dorothee has a distinct version of feminist theology and it makes sense to me, what I understand of it.

From Theology for Skeptics (Dorothee Soelle)

Carter Heyward, one of the leading voices of systematic theology between Christianity and post-Christianity, speaks of God the "power-in-relationship" which lets us take part in the power of life.4 In fact God is power, but precisely not the relationless, self-sufficient power of the ruler who also uses force when necessary. Modernity has given its answer to this authoritarian God: it has made him superfluous. He no longer has a role to play. He is not scientifically applicable. But is the authoritarian male God all that has been meant within the Jewish and Christian traditions by the title "God"? What happens with these other traditions, and how do they relate to the scientific model of control?

Unresisting submission to the force that does not allow justic in trade relations, that builds peace on the basis of militarism, and that further destroys or replaces creation has two roots.  One is patriarchal Christianity, which is fixated on authority: the authoritarian God is still implored helplessly in the expectation that sometime he will yet intervene. The other root of subjection is the post-religious belief in male science - no longer understood humanistically - which governs over those subjected impotently to it in the manner of an ancient god of fate. The old God can at most represent a kind of protection from catastrophes for true believers, as Christian fundamentalism imagines; he does not have liberating qualities.

In feminist theology, therefore, the issue is not about exchanging pronouns but about another way of thinking of transcendence. Transcendence is no longer to be understood as being independent of everything and ruling over everything else, but rather as being bound up in the web of life. Goethe says in his aphorisms about love: "Voluntary dependence, the most beautiful state, and how would it be possible without love?" God is no less voluntarily dependent than all of us can be through love. That means that we move from God-above-us to God-within-us and overcome false transcendence hierarchically conceived.

Posted by SteveA at 9:38 PM No comments: Links to this post 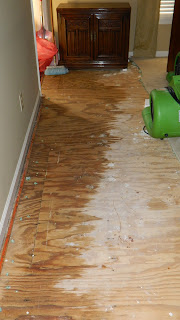 On Friday after Thanksgiving while in Arkansas we heard that a water line break occurred in our Knoxville home with water coming out from under the front and back doors.  Neighbors peeking through the door window could see that the ceiling had come down in places.  So, we began a chain of phones call with insurance, a mitigation company, a helpful neighbor and family and hurried to cover the five hundred miles home expeditiously.  Fortunately nothing of importance, like pictures, books, cherished objects, etc. was damaged.  Mainly floors and ceiling.  The origin was a plastic nut attached to a commode water tank that failed and allowed water to be sprayed in the upstairs master bath.  Likely occurred not long after we left on Wednesday.  A neighbor cut the water off on Thursday.  Mitigation began Friday evening.  The picture to the left was taken in what we call the office room.  We are not worried much about this.  We are being treated fairly by our insurance and service companies.  It has been quite disruptive to our routine but, so be it.

It has been my privilege to hear a number of flood stories from various people I have run into since then.  For whenever I describe what happened to us, the ones with whom I'm discussing will have their stories to tell.  I never knew water leakage problems were so widespread.  There must be a fascination with this type of problem that other difficult house situations do not exhibit.  There is something about water and what it can do that goes deep into the human psyche and this has been manifested to me by this event.

I never watched the Phil Donahue show much.  It was the precursor to Oprah Winfrey and earlier in the day so I only had the opportunity if sick or on vacation.  One thing he said in one of those rare shows made a very big impression on me.  He related why he was oriented toward communicating with women and what he admired about them.  He said that if you have a group of women meeting together and one of them shows up with a cast on her leg, the other ladies will ask how it happened, how does she feel, what did the doctor say, ie. focus on the person with the cast.  He said when a man with a cast joins a group of men, it will be a competition of each saying in essence, "you should hear what happened to me"  or "I've got one better than that."  Some of my acquaintances have been like that but others have been more empathetic.  There are a couple of guys I know that if I were to tell them I had won a Nobel prize in Physics, they would have to top it with some story of theirs.