The Narrative Texture of Nature - a quotation from J. Haught's "Deeper than Darwin"

Thought provoking reading from Deeper Than Darwin: The Prospect For Religion In The Age Of Evolution

Celebrated academicians, for example, often think of the cosmos as a pointless swirl of mindless stuff on which a patina of life and mind glimmers feebly for a cosmic moment.5 The narrative texture of nature still lies largely unacknowledged. However, once we develop the habit of thinking of the cosmos as a story-as geology, biology and astrophysics now demand that we do-the universe again becomes something to be read, possibly at many levels of depth. We not only now find in nature features analogous to codes, alphabets, grammars and information. We can also make out the outline of a dramatic adventure. But shall we be able to find a "meaning" written there also?
......

Not if we persist in our literalism. Like all texts and stories, nature is susceptible to shallow readings that fail to get to its inner substance. Today, it seems to me, evolutionary materialism is a kind of "cosmic literalism" stuck on the surface of nature, satisfied with groundless claims that there is simply nothing beneath the "fundamental" laws of physics and natural selection. Just as biblical literalism remains content with a plain reading of scripture, the modern decision to understand the universe and the evolution of life as "merely material" is essentially a literalist flight from the depths of nature.
Today, we are all painfully aware of religious literalism and its sometimes hideous consequences. Literalism, of course, is one of the side effects of literacy.
Posted by SteveA at 6:51 AM No comments:

Email ThisBlogThis!Share to TwitterShare to FacebookShare to Pinterest
Labels: Depth

The title of this post was lifted directly from Jeff's blog, where he gives profound thoughts relevant to my last two posts.  Check it out here.  He abstracted his thoughts from two podcasts he heard. I'll be thinking about it today and let take some time to soak in.


The confluence of these two thinkers - Pichon and Wright, one an orthodox Catholic the other a naturalistic agnostic - are encouraging and uplifting - both pointing, obviously unintentionally, to a reality larger than ourselves or our particular concerns but that "derives down" to imbue meaning and power in our individual existence and especially in those places and ways where we live in compassion, stand for justice, and seek to develop and support systems and institutions that advocate for the weak, the poor, the marginal and the suffering.
Posted by SteveA at 7:01 AM 2 comments:

Finally, my travels are over for a while.  Last week was in Newport News, VA for a meeting related to turbine engine instrumentation.  The reception Tuesday night included a chef who made a tasty Bananas Foster on demand.  Ummm Good! 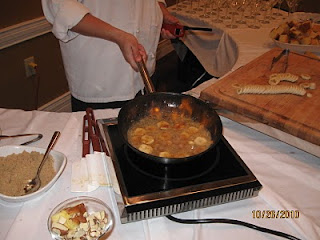 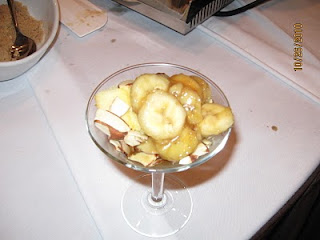 On the trip I carried a copy of God After Darwin by John Haught  and Exploring Reality:  The Intertwining of Science and Religion by John Polkinghorne.  Enjoyed both of them but the first book really whetted my appetite for more by that author.  So, while in the waiting room for my annual physical exam at work this morning, I downloaded to my Kindle, Deeper Than Darwin:  The Prospect For Religion In The Age of Evolution by John Haught.  Here is a snippet from an early chapter.  He mentions that not only is a literal interpretation of scripture pursued by many religious people but that there is an analog of that within the scientific community.


However, in a parallel way, a literalist interpretation  of nature-one that goes no deeper than Galileo's quantitative symbols or  Darwin's idea of natural selection-can also lead scientists to dismiss religion  for the shallowest of reasons. Scientific deciphering of nature has been the  occasion for great gains in knowledge, but it has also permitted the emergence   of a most soul-deadening "cosmic literalism." Our recently acquired  scientific expertise in reading the text of nature has led us into such a trancelike   fixation on surface codes and signifiers, and on life's evolutionary grammar,   that we fail to look into the depth that lies beneath them. I hope in the  following pages to burrow beneath both religious and cosmic literalism.  Only in the depth beneath the texts of nature and holy writ shall we find a  way to reconcile science and religion, evolution and the idea of God.
Now that is a new idea to me.  And, wouldn't you know that it connects with my previous post, from different authors, about how people in our age are prone to the literal view of things.   I'm looking forward to learning how he fleshes out this insight.
Posted by SteveA at 8:35 PM No comments: