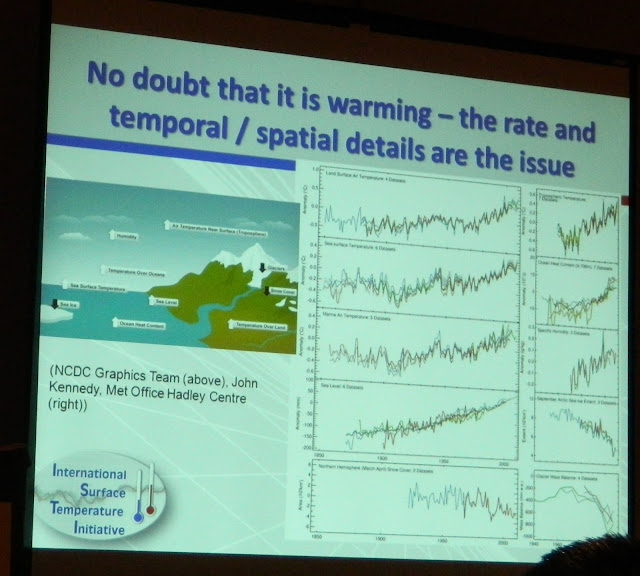 This week I am attending the 9th International Temperature Symposium.  It is held once every ten years.  Heard an interesting talk this morning by Peter Thorne.  He is involved in the International Surface Temperature Initiative. He indicated that even without temperature information, we can be assured that there is global warming is occurring.  Nonetheless, this initiative is attempting to improve the temperature records and make them available since "the rate and temporal/spatial details are the issue." 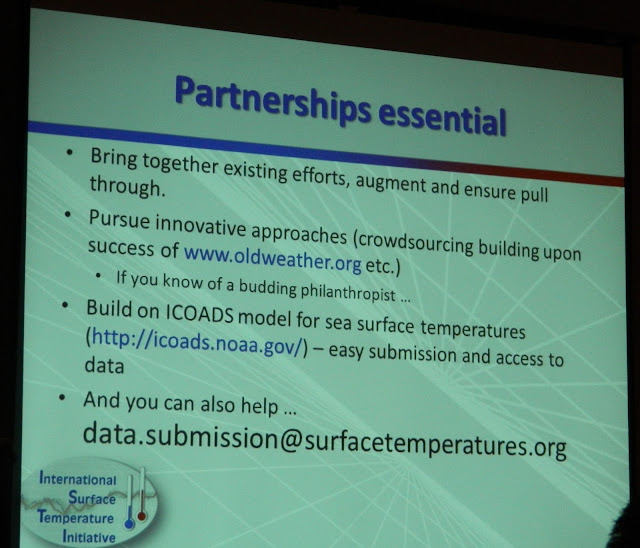 Posted by SteveA at 1:50 AM No comments:

Did Jesus “Do What the Bible Says”? Some thoughts on Jesus, Biblical Formalism, and Problem of Indeterminacy

Did Jesus “Do What the Bible Says”? Some thoughts on Jesus, Biblical Formalism, and Problem of Indeterminacy

Matt's Theoprudence blog  at the above link discusses two types of interpretation of Biblical text:  formalist and purposive.  The prime example that illustrates this problem of interpretation concerns Jesus healing on the Sabbath.  From a formalist approach, Jesus clearly broke the rule that prohibits work being performed on the Sabbath.  However, in one of the texts, it is said that he says that the Sabbath was made for mankind and not mankind for the Sabbath.  This implies that the rule is not absolute but has lots of wiggle room based on an inferred purpose of the rule.

Since early adulthood, in a break with my traditional conservative Reformation and Restoration Movement roots, I have come down on the purposive side of things.  I would give a hat tip to Professor Andy T. Richie for aid in starting me down that path.  He took us through the book of Matthew in the Life of Christ class my sophomore year at Harding.  How can one think otherwise after a close reading of the Sermon on the Mount?

For a humorous application of the formalist approach see my daughter-in-law's blog post here.  She is in law school and the interpretation of laws is somewhat important in that occupation.
Posted by SteveA at 11:22 PM 3 comments:

I've followed Wade Rogers' blog for a number of years and have benefited in many ways.  A recent post of his asked the question What Problem is God Trying to Solve?  He lays out the question and gives what he thinks is hinted at by scripture and I think he is headed the right direction.  He is pondering clues from scripture  I won't summarize but here is a morsel of what he is aiming at:

Wade:  The best clue I can find in the story itself is that God created human beings “in his image.” We were the last to be created, but not an afterthought. More like the ultimate aim. God created a world perfectly suited to sustain creatures bearing his image.

I've been pondering, on the other hand, with clues from the book of nature in combo with scripture.  I responded with:

Steve:  I think what you say overlaps some with process theology, which I’m wanting to look into more. Philip Clayton has somewhat this view and he writes about process and the principle of emergence. He is another interesting author, like Nancey Murphy, many of whose books are quite expensive but who cover this interesting territory. While I’m at it, Teilhard de Chardin’s Phenomenon of Man was assigned in my Philosophy of Religion class at Harding University in the spring of 1971. At the time I thought his conjecture was odd and warrantless. Now I find him inspiring and many others do now as well. What he predicted is coming true with the internet and impending connectedness of everything. Your “god-like beings” finds more resonance with the theosis concept of Orthodox Christianity. So the idea goes back quite a way actually.


Steve:  Wade, I slogged through the Phenomenon of Man just this past year. It was hard going for me. He was charting new territory by himself and had no special jargon or vocabulary to help or push away from. Still glad I did it. What has also aided me is reference to him and use of him by others. Modern interpreters of him like John Haught in “Deeper than Darwin” and Ilia Delio in “The Emergent Christ” often place things that du Chardin said in a fitting context that makes sense to me. For instance she explains de Chardin as saying that God is “a divine source not in the past or “up above” in a timeless present but “up ahead” in the future. He described the God of the future, the God “up ahead,” as the ultimate force of attraction for the universe, drawing the universe toward intensification of complexity and new creation.” … “Teilhard used the term Christogenesis to indicate that the biological and cosmological genesis of creation is, from the point of faith, christogenesis. By genesis he indicated that evolution involves directed change organized becoming, patterned process, cumulative order. … Teilhard’s faith in Christ led him to posit Christ, the future fullness of the whole evolutionary process, as the “centrating principle,” the “pleroma” and “Omega point” where the individual and collective adventure of humanity finds it end and fulfillment.”
Posted by SteveA at 5:09 AM No comments: